This symbolic, world-famous appellation, has it roots in France’s Saône & Loire region, between Tournus in the north and Mâcon in the south. There is no such thing as “a type of Mâcon wine”, there are many... Those who have had the pleasure of visiting this wine area will have appreciated the incredible diversity of the landscape and the remarkable variation of hilly terrain, with straight rows of vines on gently rolling slopes interrupted by some very steep hillsides, facing the Saône Valley.

The vines which produce the wines of "Mâcon" sit on some 40 kms of land, running through hillsides and valleys, drawing their vitality and their aromatic quality from a diverse range of terroirs.

The colour of the white wines varies from white gold to straw yellow and even greeny gold, while the reds range from garnet to crimson.

Since 1937, the "Mâcon" appellation has been defined by regulations which set out the production area, the soil types, the viticultural methods and last, but not least, the vinification methods, i.e. the wine producer's own unique touch.

Its wines are therefore the result of a combination of the terroir, the two permitted grape varieties (Chardonnay and Gamay) and the knowledge and skill of the producers.

The Union des Producteurs de Vins “Mâcon” (Union of Mâcon Wine Producers),referred to by the UPVM acronym, was created in 1972 and is the “Organisme de Défense et de Gestion (protection and control organisation) for the Mâcon appellations. It works alongside the Insitut National de l'Origine et de la Qualité (INAO), to monitor production conditions and to ensure that the practices set out in the appellations’ regulations are adhered to.

It represents around 1600 producers who declare their harvest under the Mâcon appellations, 12 cooperatives and 500 independent producers. All register their wines through the UPVM, as either "Mâcon", "Mâcon-Villages" or "Mâcon" along with the village name.

The UPVM helps protect and promote the terroirs, local traditions and the knowledge and skill of the producers, as well as their wines.

In general the organisation takes all steps necessary to protect the interests of its members and provides services to support them in their professional activities.

In order to perform its role effectively, the UPVM works with two commissions: one responsible for internal management (overseeing production conditions), and the second, responsible for communication. The commissions are presided over by a board member.

United by their diversity, the wines of Mâcon offer a vast array of flavours and aromas.

Hierarchical Structure of the Mâcon AOCs

The different regional appellations are principally defined by the geographic area they sit in, as well as by soil type, planting density and viticultural methods used (pruning, yields etc).

The various appellations are set out in "concentric" geographical zones, becoming smaller and smaller around the villages, and are as follows:
- Mâcon (red, rosé or white)
- Mâcon-Villages (only for whites)
- - Mâcon + commune (district) name (red, rosé or white), there are in fact 27 permitted commune names that may be added to the “Mâcon” appellation.

Mâcon has a continental climate, with large variations in temperature between seasons.
There is always a threat of spring frosts right up to the middle of May and hailstorms during the summer months, particularly in June.
A long dry, sunny September helps the grapes to reach good maturity.

The combination of the producers’ skill, the unique character and the diversity of the terroirs, enables the region's grape varieties - Chardonnay and Gamay - to express themselves to the full, reflecting the subtle aromas of each of the appellation.

Whether on gentle plains, or on steep, rugged slopes, the terroirs will behave exactly as they please and, in so doing, reveal the unique character of each wine.

So as you can see, there is no such a thing as one type of Mâcon wine, there are many! 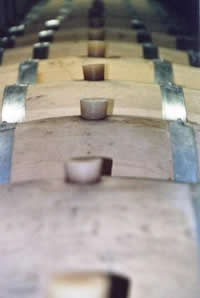 10 to 11 million bottles are exported

The regional market for Mâcon red seems to have stabilized at 25,000 hl.
Sales of all vintages of Mâcon white have increased by 34% over this period.

Macon, wines of character, to be enjoyed with…

On the nose, floral aromas often dominate with subtle, more lofty infusions of linden, jasmine and honeysuckle. It is on the palate that an array of flavours from the multitude of landscapes and terroirs are clearly detectable. Some wines are fresh, mineral and zingy with a range of aromatic flavours. Others are powerful, smooth and easy to drink; one wine may release abundant dried fruit aromas, while another wine may reveal aromas of citrus fruit, developing buttery notes on the finish. There is a vast array of aromas and flavours, which will tantalize the taste buds of wine lovers everywhere.

The white wines of the Mâcon region display shades of colour that span white gold to straw yellow, with bright, soft silver or green highlights. On the nose, the wines release aromas of broom, white roses, acacia, honeysuckle, bracken, verbena, lemon grass and citrus fruit (grapefruit, mandarin). Hints of pine, quince, and fennel come through on the finish. The variety of flavours detected on the palate reflects the various landscapes of the villages and their terroirs. The wines are fresh and easy to drink, dry but very fruity. They show good concentration and the high levels of acidity that are necessary for ageing. These wines are characterised by softness and smoothness.

To show off their unabashed charm and attractive character to good effect, these wines can be served, quite simply, as an aperitif with crackers, peanuts and olives. Their versatile character and soft, smooth, fresh character and complex aromas enable them to pair well with many dishes. Their excellent balance ensures they can be enjoyed in winter with chicken, turkey and veal in creamy sauces, as well as creamy risottos with meat or fish. In the summer, they can accompany grilled fish, cold antipasti and ratatouille, and mixed salads (even with onions!). The wines envelop these foods with aromatic, fruity concentration. They can even be served with sushi and goat's cheese.

Organoleptic characteristics: When young, Mâcon white releases aromas of spring flowers: hawthorn, wild roses, acacia, honeysuckle. With time the aromas evolve, becoming evocative of undergrowth, hazelnut, honey and toast. Depending on the vintage, the wine can be aged for 5 to 10 years.

The colour of red Mâcon wines ranges from cherry red, deep garnet to deep ruby. The purple highlights are characteristic of the Gamay grape variety. On the nose, the wine takes on light aromas of red and black fruit (redcurrant and blueberry), blended with undergrowth, mushroom, kernels, and animal aromas. With age, prune and pepper aromas develop. The wines are lively, full of spirit, full-bodied and easy to drink. These fresh, fruity wines, a little astringent when young, become smoother and soften out with time. They have excellent texture and structure.

Perfumed, full-bodied and lively, these wines go wonderfully well with good charcuterie (pork meats) such as hams, terrines and pâtés, because the smooth, greasy texture of these foods is balanced by the freshness of the wine. This flattering, softening effect also works with subtly flavoured, stringy meats, such as rabbit, and boiled or braised beef. With their nice acidity and attractive character on the palate, these wines are perfect with homemade hamburgers and tapas. Their aromatic strength and easy-going nature also make Mâcon wines an excellent match with summer salads.

Since ancient times the Mâcon area has played an active part in the development of the Burgundy wine region, due to its strategic position on the axis of waterway trade routes.

Mâcon benefited from being located at the crossroads between Lyon and Cologne, allowing it to take full advantage of trade, particularly that of wine.

When the Abbey of Cluny was established in the Middle Ages, wine production and trading really started to flourish. Alongside their religious practices, the monks of Cluny included the consumption of wine into the Rule of Saint Benedict (guidelines for monastic living) and from then on it became part of their daily life.

Very much a part of local civil life of that time, the Benedictine monks endeavoured to “scientifically” improve wine growing, production and storage methods, with quality being the prime concern.

The wine industry developed and structured itself around wine estates and châteaux.

LThe Mâcon wine growing area bears traces of its past in its Romanesque architecture which was heavily influenced by the monks of Cluny.

In every village, heritage now blend into the modern-day landscape.

Originally build by dry stone-walling, these covered terraces were traditionally constructed above the vaulted cellar of the property. Their purpose was to let in light but preserve the coolness of the cellar.

Each year in March, the UPVM organises its now, traditional competition know as the Distinction Saint-Vincent. The Distinction St-Vincent was created to showcase the best Mâcon appellation wines, without establishing any classification between them.

Well and truly established in local Macon life, the UPVM is involved in many of France’s famous events.

Since its creation, the UPVM has supported many local events including:
- The Wine Rally
- Show Jumping in Chaintré

The UPVM also lends its support to numerous local causes which share its aim of developing a territory using its own resources.

The UPVM travels worldwide to promote its appellations in countries including Russia, Japan and the United States.

Mâcon wines, which are now world famous, continue to evolve and progress. 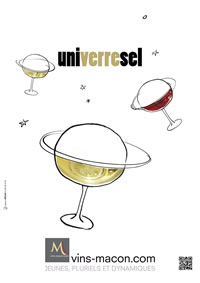 In 2009, the Burgundy wine world gave Mâcon its due recognition, by allowing the Saint Vincent Tournante event to be hosted in the Mâcon area for the very first time.

2012, a vintage that marks the anniversary of Mâcon wines

In 2012, the Mâcon appellation celebrates its 75th anniversary!

This is a great opportunity for the whole region to celebrate the "young, diverse and dynamic" Mâcon wines in an original, festive manner.

Announced in January, the launch of this anniversary year will be full of surprises!

You are invited to Mâcon on 26th and 27th May, to have your taste buds tantalized and your senses awakened!